Item 96: signed copies of HIERATH, IN EXILE and EAGLE OF THE KINGDOM by Joanne Hall, plus critique

The highest bidder will receive 3 books: HIERATH, IN EXILE and EAGLE OF THE KINGDOM, all signed by the author.

Additionally, Joanne will critique any SF / fantasy short story or novel extract (up to 5,000 words). 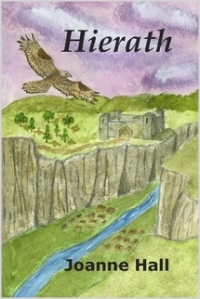 The world stands on the edge of peace, the first for a thousand years.  A fragile alliance has been formed between the New Kingdom and Telesia, and they have agreed in principle to set aside their ancient quarrel over land and culture.  The deal has been forged by Alex, the peace-loving newcomer to the throne.  But things are about to change.

Alex falls in love with Lydia, a fisher’s daughter from the Estmarch, to the displeasure of both his family and his friends.  His aunt intends for the union with Telesia to be bonded with Alex’s marriage to a princess of the Telesian Royal House, and the sudden arrival of Lydia ruins her carefully-laid plans.

And then an horrific act of betrayal drives the continent once more to the brink of war. 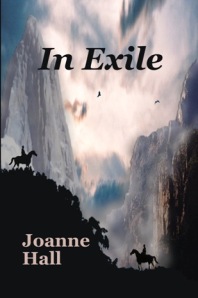 Alone and in hiding, the young widowed Queen takes on a new identity as she mourns the death of her husband and separation from her new-born son, abandoned to the care of strangers for his own protection.

Hatred for the man who destroyed all she held dear tempers her grief and haunts her nightmares as she relives his brutality, his betrayal.  The support of her cousin and a new love do little to ease the pain of her emotional scars, until a face from the past tracks her down in the famous trading city of Cape Carey.

He brings news that sends her on a journey across the Kingdom, from the high mountains of the north to the rolling hills of the Estmarch, her birthplace.

It is a mission to restore hope.

Imprisoned in the desert city of Tellis, tangled in the schemes and plotting of the Telesian court, Lydia must risk her life to save her friends.  Escaping to the Endless Mountains, realm of the Northern Ghosts, she finds solace with these unpredictable feline allies as she prepares for war.  Aided by her loyal companions, Bale and Meganne, she supports the man she loves as he readies an army, determined to take back Hierath Castle and, with it, the Kingdom.  But many would do anything to ensure their failure.

Lydia burns with the desire to avenge her family, massacred at Lydyce on Valery’s orders.  Her son, Rhodri, stolen from her and used as a pawn in Valery’s political games, is in danger from every side.

To make matters worse, the strength of the Old Ones is failing.  The Philosopher is dying. As he searches for one to take his mantle, Lydia can no longer rely on his support.  Does she have the courage to face her greatest enemy without him?  Murder and betrayal stalk the corridors of Hierath as Lydia’s army closes in.

About Genre for Japan

Set up by a group of genre fans & professionals, our aim is to raise money for the BRC's Japan Tsunami appeal by auctioning special items donated by the SFF field.
View all posts by Genre for Japan →
This entry was posted in critique, signed and tagged critique, eagle of the kingdom, hirateh, in exile, joanne hall, signed. Bookmark the permalink.

5 Responses to Item 96: signed copies of HIERATH, IN EXILE and EAGLE OF THE KINGDOM by Joanne Hall, plus critique