A fantastic story, and beautiful books – so place your bids now! 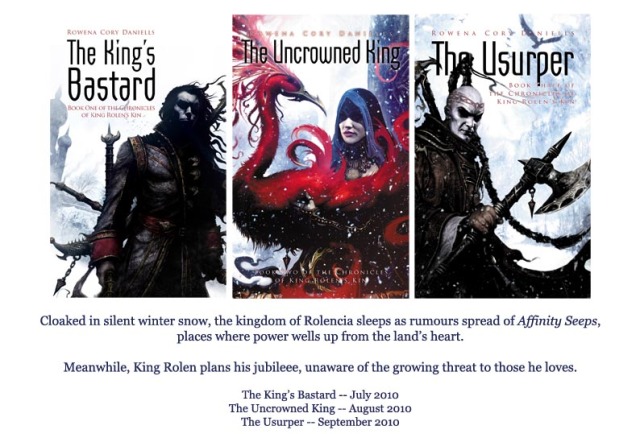 Only seven minutes younger than Rolencia’s heir, Byren has never hungered for the throne. He laughs when a seer predicts that he will kill his twin. But the royal heir resents Byren’s growing popularity. Across the land the untamed magic of the gods wells up out of the earth’s heart. It sends exotic creatures to stalk the wintry nights and it twists men’s minds, granting them terrible visions. Those so touched are sent to the Abbey to control their gift, or die. At King Rolen’s court enemies plot to take his throne, even as secrets within his own household threaten to tear his family apart. Political intrigue and magic combine in this explosive first book in an exciting new fantasy trilogy.

Thirteen year old Piro watches powerless as her father’s enemies march on his castle. A traitor whispers poison in the King’s ear, undermining his trust in her brother, Byren.

Determined to prove his loyalty, Byren races across the path of the advancing army, towards the Abbey. Somehow, he must get there in time to convince the Abbot to send his warriors to defend the castle.

Meanwhile, the youngest of King Rolen’s sons, Fyn, has barely begun his training as an Abbey mystic, but he wakes in a cold sweat, haunted by dreams of betrayal…

Now a slave, Piro finds herself in the Merofynian Palace where, if her real identity is discovered, she will be executed. Meanwhile, Fyn is desperate to help his brother, Bryen, who is now the uncrowned King. Bryen never sought power but now he finds himself at the centre of a dangerous resistance movement as the people of Rolencia flee vicious invaders. How can Byren defeat the invaders, when half his warriors are women and children, and the other half are untrained boys and old men?

About Genre for Japan

Set up by a group of genre fans & professionals, our aim is to raise money for the BRC's Japan Tsunami appeal by auctioning special items donated by the SFF field.
View all posts by Genre for Japan →
This entry was posted in series, signed, solaris and tagged bookplates, king rolen's kin, rowena cory daniells, series, signed, solaris. Bookmark the permalink.